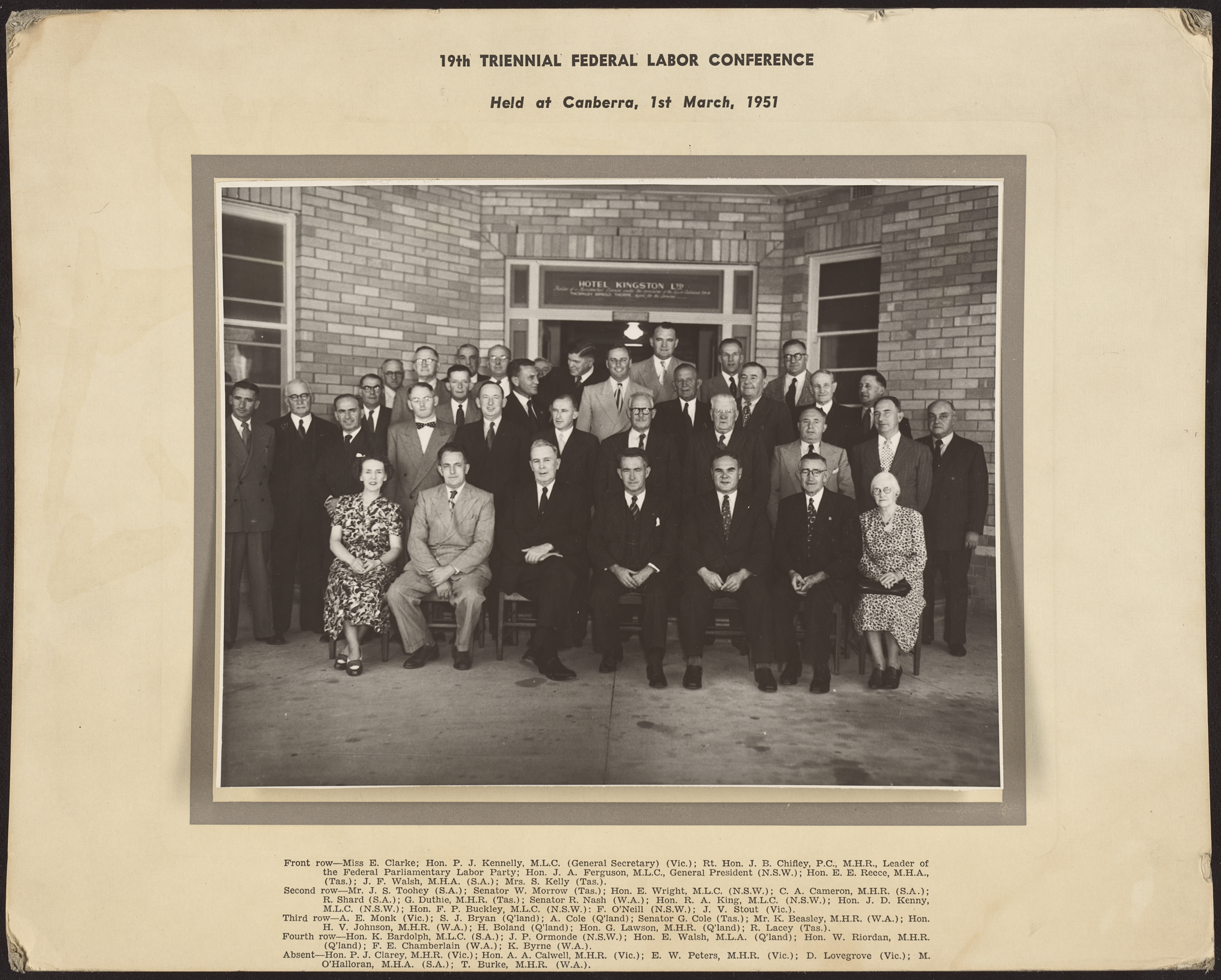 Although Australia avoided invasion during the Second World War, Japan's frightening lunge southward, culminating in the fall of Singapore, confirmed the deep-seated fears of many Australians about the territorial ambitions of their northern neighbours. Those fears helped to reconcile Australians to the Labor government's announcement of a massive immigration program to dramatically increase the nation's population. But that would take decades to achieve.

In the meantime, Australia's historic invasion fears were stoked in the post-war years by the decline of Britain's military and economic power and the concomitant rise of nationalist movements that achieved independence for former European colonies, from India to Vietnam. The military victory of the Communist Party in China, the expansion of Russian influence in Europe, and the explosion by Russia of an atomic bomb all served to exacerbate Australian fears.

It was a testing time for Chifley and his ministers. Emboldened by the leading part the country had played in the Pacific War, and by the considerable military strength it now possessed, Chifley and the External Affairs Minister, Dr. H.V. Evatt, tried to create a more independent role for Australia, both within the British Empire and in the newly-created United Nations. By joining with other like-minded 'middle powers' they sought to enhance Australian security by making the United Nations a real force for preserving the hard-won peace.

Rather than mimicking Menzies by decrying the decolonisation of the European empires, Chifley and Evatt argued that independence movements did not necessarily pose a threat to Australia. In the case of the Dutch East Indies, the Labor government supported moves to create an independent Indonesian nation. At the same time, it boosted Australia's defence capacity with the purchase of two aircraft carriers and increased Australia's international influence by establishing embassies in most major nations of the world. That influence was acknowledged in 1948 when Evatt was elected president of the United Nations General Assembly.

Despite the noble ideals and aspirations of Chifley and Evatt, the end of the Second World War did not bring an end to international tensions, with increasingly sharp divisions between the former wartime allies, the United States and the Soviet Union. Chifley and Evatt hoped that Australia could remain aloof from it all, and even act as an honest broker between both sides. Instead, Australia was increasingly forced to align it itself with the non-communist world as the Cold War came to dominate politics on both the world and domestic stages.

Domestically, the Communist Party had enjoyed increasing influence in the trade union movement, helped along by the 1930s depression and the wartime alliance with the Soviet Union. At the 1946 election, it attracted support from some traditional Labor voters who wanted more radical changes than the government was offering. Communist union leaders also led prolonged strikes that pushed for higher wages and better conditions in key industries, such as coal mining, steel and transport, thereby threatening Chifley's campaign to keep inflation under tight control and imperilling Labor's hold on office.

There was an increasingly bitter struggle within the union movement to remove Communist officials from office. For Chifley it would have been reminiscent of the 1930s struggle against Jack Lang, except this time the political struggle was complicated by the participation of the Catholic Church and the fervent anti-communist, B.A. Santamaria, who led the secret Catholic Social Studies Movement which organised opposition to Communist trade union leaders. Groups organised by right-wing members of the Labor Party allied themselves to Santamaria's Movement and joined in the struggle against 'Red revolution'.

Although Australia did not descend into the McCarthyite witch-hunts that convulsed American politics, the Cold War infected politics in Australia with its pernicious allegations of people being Communists or fellow-travellers. While deploring communist ideology, Chifley believed that the workers themselves, rather than outside groups, should be responsible for choosing union leaders. He attempted to keep the church out of politics, but it was a losing battle which cost the Labor Party dearly as conservatives claimed that it was soft on communism.

Chifley could not win. When he pressed ahead in 1947 with Labor's long-held plans to nationalise the banks, he was accused by the Liberal Party of being intent on the socialisation of Australia, with one Labor MP being lambasted in parliament as 'a Communist bastard'. The following year, when Chifley asked Australians to give the government permanent power over prices and rents, the referendum was described by the Opposition as a further attempt at socialisation.

When the Chinese Communists took power in China, frantic calls were made in Australia for the local communist party to be banned and its members driven from public life. But Chifley refused to use the authoritarian methods of the communists against them, although he established the Australian Security Intelligence Organisation as a check on their activities. He also sent troops in to work coal mines during a strike in 1949 by the Communist-run miners' union.

Under Curtin and Chifley, the Labor Party had won two resounding electoral victories in a row, the first time that it had done so. Chifley was confident that the party could win an unprecedented third victory at the 1949 election, confident that his government's achievements of full employment, prudent economic management, successful post-war reconstruction and visionary projects like the Snowy Mountains Scheme would see off the conservative challenge. However, Australians wanted to be free of the lingering wartime restrictions.

The defeat at the 1949 election was a bitter blow for Chifley. In opposition, however, Chifley quickly re-established himself, and the Labor Party's credentials. Throughout 1950 he steadily opposed Menzies attempts to weaken control over the Commonwealth bank Board and measures which he believed would impinge on individual freedoms.

Although an opponent of communism, he also spoke against measures by the Menzies Government to ban the Party and his attitude was summed up in his oft used expression in debate, quoted from Pandit Nehru that "you can not impale an idea on a bayonet".

Towards the end of 1950, he had a sudden heart attack, when he was driving home in his car. He had to spend several weeks on hospital and spent an extended time in care. The warning was clear for Chifley, but was not heeded. He returned to the leadership of the Labor party in 1951, wanting to fulfil his duty to the Party.

Soon, however, the Menzies government brought on a double dissolution election over the question of banning the Communist Party. On 28 April 1951, Labor was again defeated, but Chifley held the seat of Macquarie comfortably. He visited the NSW ALP Conference soon after, to deliver what would be his last major speech.

On the night of 13 June 1951, the night celebrating 50 years of federation, most of Canberra was celebrating at the State Ball at Parliament House. The room hushed as news came through that the Labor Leader, Ben Chifley, had passed away from a sudden heart attack.