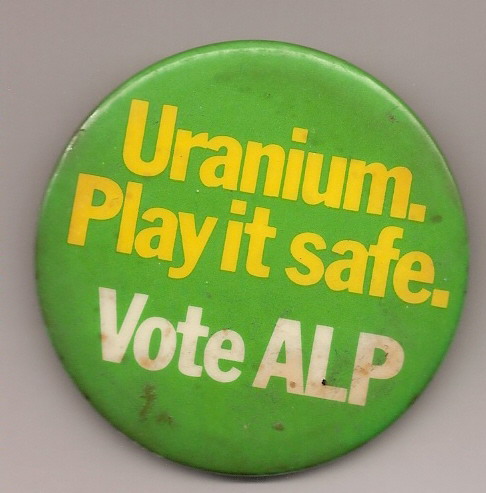 View original image
Anti-Uranium badge
During the 1970s the issue of Uranuim mining became a focal point in the emerging environment movement.

A number of technological changes in the second half of the twentieth century brought about profound changes in both society and politics that had begun in the war. In 1956 the first regular transmissions of television began in Australia. Within a short period this had a radical impact on the conduct of elections, with a consequent change in the way political parties managed their affairs. For the Labor Party, TV meant that electoral advertising on the new media was much more expensive than the previous reliance on the press, public meetings, and radio. Previously, party electoral funding was manageable with contributions from affiliated trade unions, along with membership fees from local branches. That was no longer sufficient if the party was to compete on equal terms with its rivals. From this time dates a determined effort by State and Federal branches of the party to organise much greater levels of funding from corporate donors. From this time, and as a consequence of this need, also dates the realisation that the Federal ALP had to have a larger and permanent extra parliamentary organisation in Canberra.

Political leaders needed to be telegenic, so that a leader like Arthur Calwell, for all his sterling personal qualities, could never have been elected to lead his party once the TV age was underway. Another impact arose from the special character of media advertising. From this time comes the increasing reliance of all political parties, including Labor, on paid or contracted advertising professionals to prepare for elections. Finally, television keeps people at home, so that it has become much harder to persuade local members to attend branch meetings and vote for their officers and delegates. From that time the mass membership of the ALP has been in decline. With these changes the modern Labor Party, even without changes to its structures or policies, was already becoming a very different organisation from that founded at the end of the 19th Century. By the mid-1960s, however, the Labor Party had not adapted to the modern world and needed new structures and policies.

By 1966, when the ALP crashed to its fourth successive electoral defeat under Arthur Calwell, everyone in the party recognised that it was time for a change of leadership and direction. There was no certainty that Calwell's long term deputy-leader, Gough Whitlam, would succeed him. The two men had been in dispute leading up to the 1966 election, so that many on the industrial Left of the party blamed Whitlam for promoting disunity. However, looking at the compete dominance of the Liberal Party in Federal politics, and recognising that much of the Labor agenda during the 1950s and early 1960s had been backward-looking and sectarian rather than progressive, most members of the parliamentary party were convinced that Whitlam's vision offered the best chance of a revival. He narrowly defeated the popular Left candidate, Jim Cairns, for the leadership. Following the retirement of Menzies in January 1966, handing over to Harold Holt, the choice of Whitlam in early 1967 meant that both sides of politics had changed leadership, inaugurating a new era in Australian politics.

Edward Gough Whitlam was a dominating personality in any company tall, handsome, witty, encyclopaedic in his reading, and supremely confident of his own ability. After war service in the RAAF he had studied law, and then entered Parliament for the seat of Werriwa in 1952. He soon demonstrated his skill in parliamentary debate, becoming one of the few who could match the mastery of Menzies in that forum. He did not fit easily into the current faction system of the party he had many confrontations with the old style Left represented by Joe Chamberlain and the Federal Executive, yet he had little sympathy for the social and political conservatism of the NSW Right in his own State. His agenda was what came to be called the 'new social issues' of race, gender, environment, human rights, quality of life, and equality of opportunity. From a similar mould the 1960s also produced Don Dunstan, who became leader of the South Australian ALP in 1967 and Premier later the same year. Neville Wran would follow in New South Wales in the 1970s, while the early 1960s saw JF Kennedy become President of the USA with a similar personal style and political agenda.

Of course, not everyone in the party, especially those on the industrial Left, approved of this agenda supplanting traditional concern for the rights of workers.

The campaign for the election eventually called for December 1972 was the most professional, long running, and media orientated that Australia had seen to that date. It reflected the reorganisation of the party's extra-parliamentary machinery, as it reflected the parliamentary leadership of Whitlam. A change…