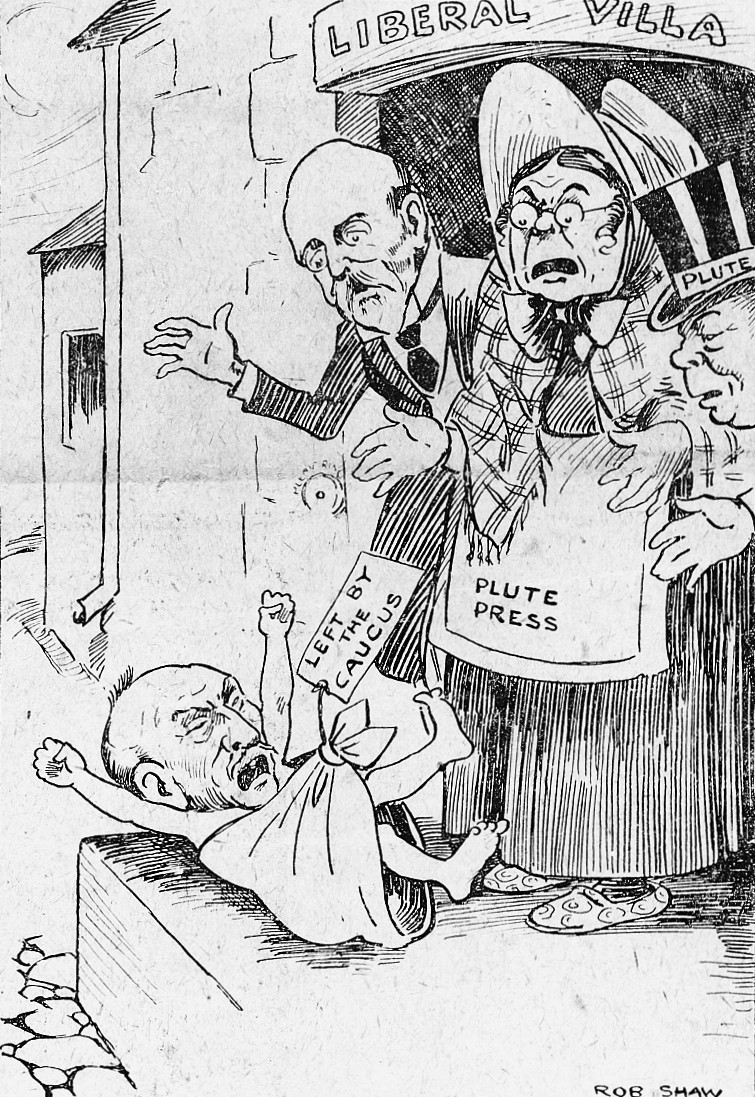 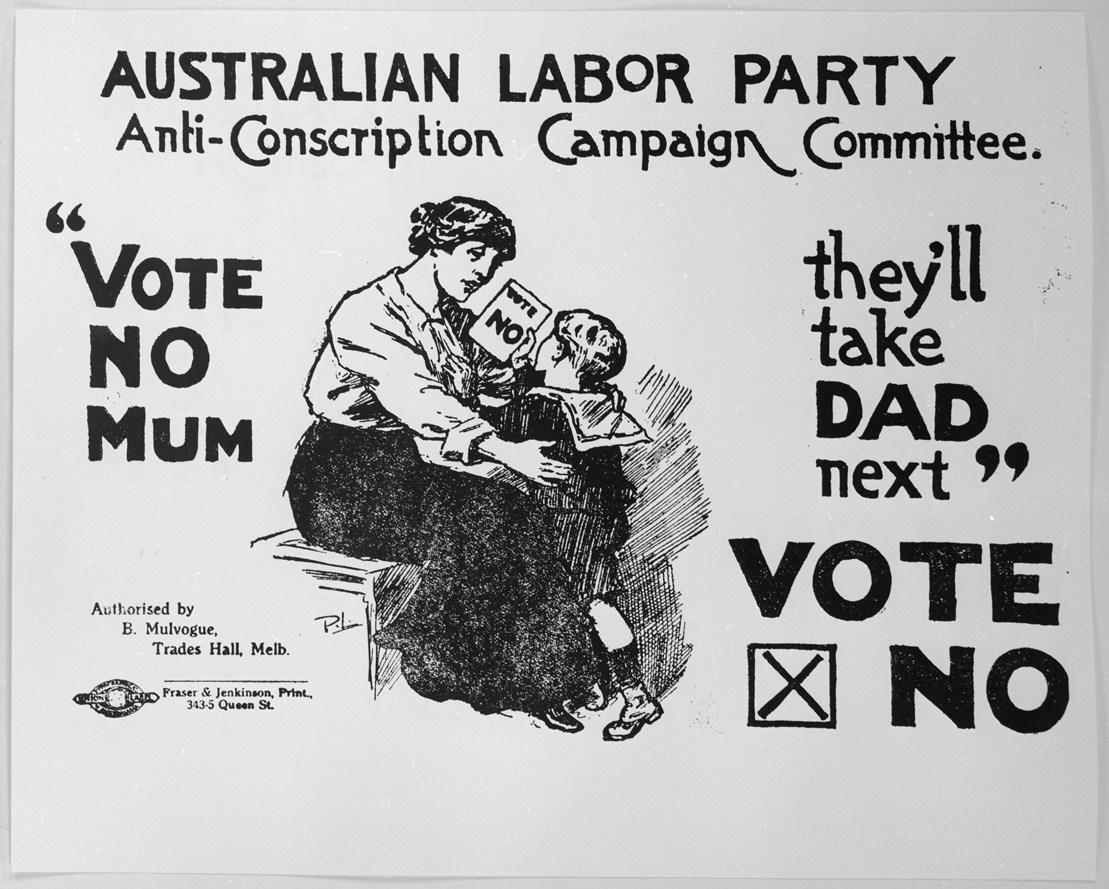 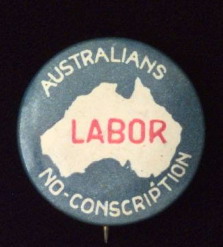 After travelling to Britain early in 1916 Hughes returned home convinced that some form of conscription would be needed to provide the number of Australian troops demanded by British authorities. The Labor Party had always supported existing legislation in the Defence Act that encouraged civilian militia training and allowed conscription to defend Australia's borders. However, there was strong opposition in the party, especially in the trade union movement, to sending conscripts overseas when there was no immediate threat to this country. Hughes convinced himself that this opposition would diminish when he explained the need. In August he announced that a referendum (actually a non-binding plebiscite) would be held to give the Government authority to change the legislation.

Earlier in 1916 the April State Conference of the party in NSW had almost unanimously decided not only to oppose conscription but to withdraw endorsement from any party members supporting conscription. At that stage, when neither Prime Minister Hughes nor Premier Holman had publicly committed to a referendum, this was regarded in party circles as non controversial. Some Federal and State MPs, who were associated with the Universal Services League, objected to the resolutions and perhaps realised that sometime in the future they might have to choose between their allegiance to Empire and party, but there was no immediate crisis until Hughes arrived back in Australia with his plan for a plebiscite to be held in October.

When the Prime Minister introduced legislation to bring on the referendum he asked for a special meeting of the NSW Executive so that he could put his case. On 4 September his proposals were rejected by a vote of 21 to 5, and when Hughes refused to accept the decision he was expelled from the NSW Labor Party and endorsement for his electorate of West Sydney was withdrawn. When NSW Premier Holman and members of his Ministry sided with Hughes in supporting the referendum they also were expelled. There was some confusion about the legitimacy of a Federal leader being expelled by a State body, and of a State leader being expelled on a Federal issue, but these were regarded as trivial matters. There was also some debate about how just it was to bind MPs to a policy that they had not pledged to when elected. A Special Federal Conference held in Melbourne on 4 December 1916 confirmed the expulsions (although with some objections from Western Australian delegates) and adopted NSW policy as Federal policy.

Already in 1915 the AWU and its journal, The Worker, had been campaigning against conscription. For the AWU, voluntary enlistment was perfectly satisfactory, as was a compulsory local militia. However, even if a total national effort was required, it was unjust to conscript young men but not to conscript, or nationalise, industry. To the left of the AWU virtually all the more militant industrial and mining unions were even more firmly opposed to conscription if not to the war itself. Meanwhile, the Universal Services League, backed by most of the non-Labor political establishment, argued strongly in favour of conscription.

Prime Minister Hughes was able to persuade most of his Ministry to support him in pushing for a referendum. He also had the strong support of the Labor Premier of New South Wales, William Holman, and most of his Ministry. In Western Australia, former Premier John Scaddan supported Hughes, as also did Labor Premier Crawford Vaughan in South Australia. However, the opposition to conscription within Labor was even more evident. In Queensland, TJ Ryan was the only Labor Premier to oppose conscription. Hughes faced strong dissent inside his own Caucus, while almost the whole of the extra-parliamentary organisation in most of the States was opposed. Only in Western Australia, where Labor had just been forced out of office, did formal party mechanisms back away from opposing conscription.

The announced referendum was a political catastrophe for the Labor Party. There were legitimate arguments in favour of conscription, but much of the debate, led by Hughes, degenerated into accusations of disloyalty or even of treason by anti-conscriptionists that they were in the pay of the Germans and controlled by the anarchists of the IWW. Naturally, anti-conscriptionists replied in similar manner, condemning their former colleagues and leaders with ferocity. It was one of the bitterest and most divisive political campaigns in Australia's history. Moreover, it was unsuccessful. The final result saw voters reject conscription by a narrow majority of about 51% to 49%, with only Western Australia, Victoria and Tasmania voting yes.

The issue of disloyalty was given added intensity just before the referendum by the arrest of twelve leaders of the IWW on charges of conspiracy to commit arson and sedition. In December they were sentenced to long prison terms. Most of the trade union movement protested at the arrests and imprisonment as politically motivated. Even the AWU and The Worker, who by then were very suspicious of the IWW, campaigned for the release of the twelve.

Following the failure of the referendum the Labor governments of Hughes and Holman were hopelessly divided and could not survive in that form. Both men could rely on the support of a majority of their Ministers, but faced the hostility of most of the rest of Caucus. Both survived in power in a similar fashion, convincing the Liberal opposition in Parliament to support them in forming a 'National' administration to fight the war by ignoring former party differences. Both attempted to extend the life of Parliament Holman was successful, Hughes not in order to avoid having to face the people in an election. In both Parliaments the rump of anti-conscriptionist Labor MPs elected new leaders and moved to the opposition benches. In contrast to 1914 when Labor was in power in the Commonwealth and four States, now the only Labor administration was in Queensland and a whole generation of men who had founded and built up the Labor Party were now enemies of Labor.

The issue of conscription was not finished. Nationalist Prime Minister Hughes, despite his earlier assurances that he would not revisit the issue, called another referendum in 1917. The campaign was no less bitter than in 1916; with an added sectarian dimension because Melbourne's fiery Irish Archbishop Daniel Mannix actively stumped the country against the proposal. The basic issue in that intervention was the merciless British suppression of the Irish rebellion of the previous year that had alienated many Irish Catholics in Australia. Moreover, once again Hughes was unsuccessful. The no vote increased, this time adding Victoria to the States opposing the matter.

During 1917 Nationalist administrations in the Commonwealth and all States except Queensland faced industrial unrest and opposition to the war from militant unions and ideologists such as the promoters of the IWW and the One Big Union movement. In New South Wales a widespread strike of public transport in Sydney was met with the full exercise of state wartime emergency powers when it was extended to other industries. Three members of the strike committee were arrested for conspiracy, while a number of other unionists were arrested on similar charges. The strike collapsed with the result that many unionists lost their jobs. Those made unemployed and blacklisted included a young Ben Chifley. The war was used as an excuse for conservative governments to wind back industrial gains made by unions and the Labor Party over the previous twenty years.

In the Commonwealth Parliament the members of Caucus who remained in the Labor Party elected Frank Tudor as leader. Almost immediately he had to prepare for an election which was held in May 1917. Hughes won a landslide victory, leaving Labor with only 22 seats…